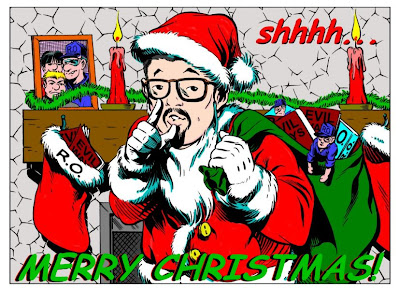 Just wanted to stop by and wish everyone a very Merry Christmas and a Happy New Year.
R.O. and the gang will return in January 2007. We hope you'll join us.
Happy Holidays.
Bobby

Posted by BobbyNash at 8:00 AM No comments: 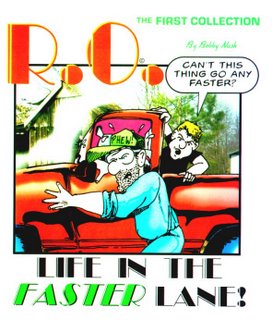 One of the questions I hear most often is how did I come up with the name Life In The Faster Lane. For the curious among you, here now is the answer to that question. In my usual fashion, it will be a longwinded answer so sit back and get comfortable.

Comic conventions are a big part of my job as a writer. I do various shows throughout the year. I enjoy the cons, although they can be exhausting. These shows are a great way to get out there and meet people whose work you enjoy, introduce yourself to people with similar interests, and meet your own fans. I highly encourage anyone interested to check them out. You’ll have a good time, but wear sensible shoes.

Side note. One of the most humbling moments for me was when I realized I had fans. Totally blew my mind when people started seeking my table out with books in hand. It’s a great and scary feeling. One I would not trade for the world.

Now back to our story already in progress.

One of the worst things I find as a creator is having an empty table at a con. I was writing comics and had a few issues, sure. But I really didn’t have much that was all ages friendly. Then an idea hit me.

R.O. and the gang had been running in Keeping Up With Kids for awhile. I had several strips completed and ready to go. I cobbled together a book of some of my favorite R.O. strips and with a photocopier, printer, and the help of artist Jeff Austin and his computer (I was not yet a computer owner at the time) I put together the first R.O. collection in limited number. Just enough for the convention. That was in February 2002, which I remember thanks to me dating the file, not my memory.

Jeff also graciously colored the cover for me, for which he did an amazing job.

As for how R.O. became Life In The Faster Lane, this is where it happened.

The strip I used for that first collected edition cover shows R.O. pushing his out of commission truck down a country road while Mel, still in the back, shouts at him, “Can’t this thing go any faster?” From there I knew I had to work faster in to the title of the book. After several attempts to be clever, I came up with Life In The Faster Lane as the title of the collection.

When it came time to change the name, that was at the top of my list.

After those books were gone, I did another collection, this time under the Life In The Faster Lane name, taking what I learned doing the first and making what I hoped was a better product.

With everything in place I decided for the new collected edition I would use the same cover, which had worked so well in the past. I did change the gag however. “Push us faster so we’ll look cool!” which I admit I borrowed and altered from a Kelly Bundy line on Married With Children. 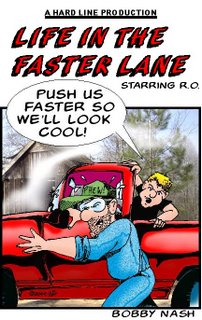 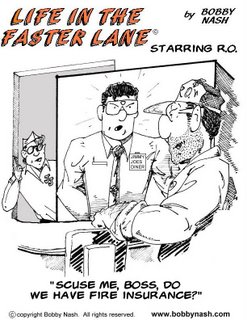 This strip remains one of my favorites to date.

Unlike many of the Life In The Faster Lane strips, this one is not based upon true life events. Although, there was that time when I was ten or eleven when I caught the kitchen on fire, but that’s a story for another time. Like maybe when I can tell it without making myself look like a total idiot.

So don’t look for it any time in the near future.

When I started drawing these one-panel gag strips back in 1992, I was managing a fast food restaurant. I decided that the best way to work myself into the stories was to have R.O.’s son work at a restaurant. One of the little oddities of doing these things is you cannot use existing franchises. That is why R.O. works for U. S. Automotive instead of General Motors where my Dad works. GM also had an issue with the first R.O. strip that showed him sleeping on the job.

For that very reason, R.O.’s son, the comic strip version of me, worked for a restaurant called Jimmy Joes. Jimmy Joes was originally conceived as the hangout. The place R.O. and his buddies would hang out after work and generally bring friends into the strips for R.O. But it could also be a place that R.O. and Honey might like to go and eat out. As they did in at least one strip.

When Keeping Up With Kids (more on the magazine coming in a future installment) picked up the strip, the tone shifted to more family gags so Jimmy Joes fell by the wayside. As did my character. I found that adding another son to the mix did not really add much to the strip. I always assume that, much like in real life, my character is the one watching from the sidelines and drawing the strips.

Time for a conceit. I don’t look anything like my cartoon counterpart. I guess you could say he’s my ideal self. A lot thinner, especially. I probably would have named him Edward (my middle name) if I had gotten around to using him again. Or maybe simply called him "Junior."

One note about the titling of the strip. When the strip first moved to the web, I changed the title from R.O. to Life In The Faster Lane Starring R.O. As I have begun focusing on Honey and Mel’s roles I have dropped the "starring R.O." part. I think it works better. Eventually, as we work through the strips you will notice that little rider start to fall away.

This was one of those gags that just came out of the blue and remains one of my personal favorites.