Ah, what could have been. Imentioned in a previous post that the image was for a cover to a book that was unpublished. I felt I should expand on that a bit. At one time there was a plan in place for an imprint called Just A Buck Comics throuh Atomic Pop Art (check out APA at http://www.atomicpopart.net/).

Hopefully, this will not require a lot of explanation. Comics for $1. A good idea and I was proud to be asked by the editor at the time, Ron Fortier (who would later help launch my pulp writing career with an invitation to write a Lance Star story) to submit a Life In The Faster Lane proposal. Learn more about Mr. Fortier at http://www.airship27.com.

Unfortunately, for a variety of reasons, the imprint did not last long, but I did have a few covers put together for consideration. 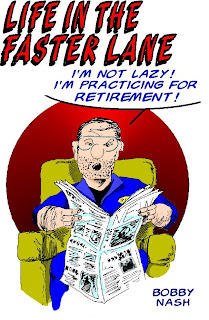 The covers and interiors for Just A Buck Comics [JABC] would have been black and white, but for fun I colored this piece and found great use for it in the Life In The Faster Lane store, which can be found at www.cafepress.com/fasterlane (sorry, can't resist an opportunity for a free plug). This image looks great on a mug, by the way. 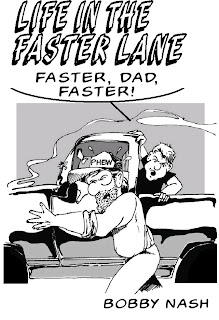 Ah, the old stand by. I've gotten a lot of use out of this image. A color version of it is also used at the Life In The Faster Lane store, which can be found at www.cafepress.com/fasterlane (sorry, that free plug thing again). 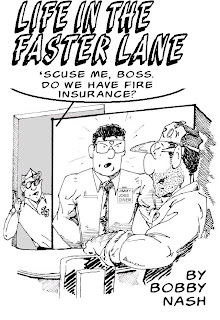 Ah, one of my favorites. And it too makes a nice cover.

Y'know, this little walk down memory lane has really gotten me stirred up to make another attmpt at a Life In The Faster Lane book. Keep an eye out here for more information.

Posted by BobbyNash at 3:33 PM