A few more classics from the early days, long before the strip was actually called Life In The Faster Lane. I have edited these somewhat fr their reprint here. I've touched up a few things and replaced the bad hand lettering with computer lettering. An, of course, I added the Life In The Faster Lane logo, which did not exist when these were originally created.

This first strip is from 1992 and is one of the earliest drawings of R.O. I had done. I thought the idea of him sleeping on the job was very funny at the time. 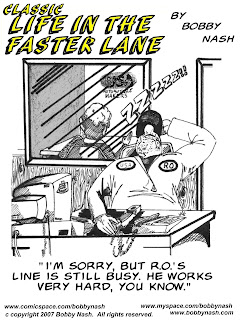 This second strip is from a year later, 1993. If memory serves (darned CRS) this was the start of the R.O./Mel war of the jokes. I thought the gag worked well, but the expression on Mel's face as he peeks around the open door in that 2nd panel really sells it. I only did a handful of strips with more than one panel. While they can work, I felt that the Life In The Faster Lane strips worked so much better as single panel gags and have stuck with that formula to this day. 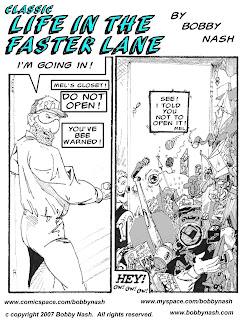 Another two panel gag, this time from 1994. This is more slapstick and really never clicked for me. I never really drew that second panel to my satisfaction. 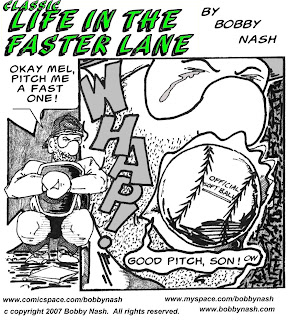 Posted by BobbyNash at 9:53 AM