CRUISIN’ LIFE’S FASTER LANE
IF I HAD A HAMMER...

Another theme filled post with commentary on each.
Three strips with R.O. weilding his mighty mallet.
Okay, okay, so one of them is a baseball bat, but still... 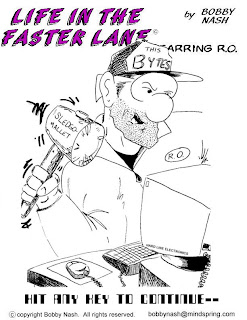 Shades of Gallagher? You betcha. Lets just call this the sincerest form of flattery. 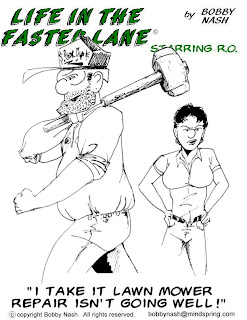 Haven't we all felt like this at least once in our lives, fellas? Come on, you know you have. 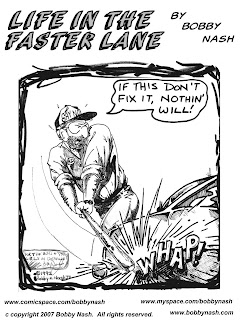 This is the first time this particular strip has ever been shown publicly. Originally, I drew this one for my Dad and his friends at work who worked in the body shop at the GM Doraville Plant, hence the "For the boys and girls at Doraville" tag. I really should have used a sledge hammer instead of a baseball bat. If I ever redraw this one I will make that change. For whatever reason this strip never made it into print.

In 1992 when I drew this strip I was really using the China Markers for shading. While it looks good on the original it does not reproduce well. And what was the idea with that border? Yeesh! Oh, I added the logo since the scan did not have one. 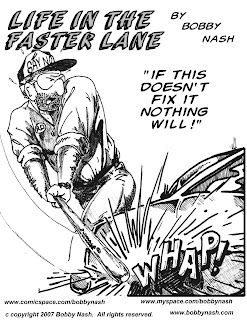 And just for grins, here's how I would have done it today. Using the same image I cropped away the border and relettered it without the word balloon (I don't draw them well). All in all I think it works much better the new crop. What do you guys think? Any preference?

Bobby, my favorite by far is the one where's he's taking the PC instructions literally. Give a good whack, that's my motto. Ha.

Glad you like it, Ron. I admit it's not the mosdt original of gags I've run, but it certainly fits R.O.'s personality.

He told me once that his computer only cost a dime. Then he pulled out a pencil and said, "See?"