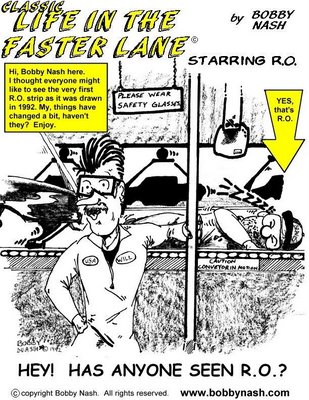 Well, if you’re reading this commentary and the accompanying strip, you fall into one of three categories. First, you are from Georgia and have picked up a copy of Keeping Up With Kids magazine and the names R.O., Honey, and Melvin Nudell are familiar to you. Second, you’ve read one of the comics or novels I’ve written and followed a link here. Or third, you just got here and are wondering just what the heck a Life In The Faster Lane is.

I’m going to assume most of you fall into that third category. Here then is how it all started.
The year was 1992. I don’t remember the month. If it wasn’t for the fact that I dated the strip when I drew it I doubt I would accurately remember the year. Oh well, no sense dwelling on my terminal CRS. I doubt I’d remember anyway.

Oh yeah. 1992. The University of Georgia in Athens, GA has a wonderful continuing education program. I’ve taken a few classes there. I probably should take this opportunity to thank the fine folks at UGA. Two of the projects I’ve received most notoriety for happened there. That’s where I began writing my debut novel, Evil Ways (still on sale, says the self-promoting huckster) and it is where Life In The Faster Lane was born.

Okay, that’s not entirely accurate. The comic strip that would come to be LITFL was originally called R.O. after the strip’s main character, but that’s another story for another commentary. The cartooning course was taught by local Athens cartoonist, Bill Staton. Bill’s class was certainly entertaining and, at the same time, very informative. We met once a week for eight weeks, I believe. One of our assignments was to come up with a one-panel comic strip.

Now, I could have easily worked up a one-off and been done with it. I have trouble doing a one-off of anything, however. As a creator, I usually immerse myself in a project. I know the characters backward and forward, up and down, side to side, almost to the point of obsession. The first thing I had to do was to come up with a character.

Then it hit me. I already knew a perfect character.

My Dad is one of the most easily likeable people on the planet. He has a great jovial nature and he’s quick with a funny comment. R.O. was a perfect name for my new character, plus it helped me define his look (which changed radically from what we see in the first few strips). Now, R.O. is not my Dad’s real name. Nor is it his initials. Somehow, someway, in a story I’ll probably never know all the details of, the nickname of R.O. Nudell was hung on him at his job working for General Motors. I asked Dad’s permission before going ahead with it. Hey, I’m no fool. I was still living at home at the time so making fun of the landlord was not the best of ideas unless he was cool with it.

With character firmly in place, I set off to draw my first strip. It shows R.O. in a precarious situation at his job working for USA Motors. It was a quick and easy strip done for class.
Afterward, I quickly dove in and drew more.

As I re-release these classic strips every wek or so, we’ll get into a little more of the history of Life In The Faster Lane. There’s a lot of good stuff coming. How I named the other characters, how I went from R.O. to Life In The Faster Lane, and I’ll answer the age old question; how much of this stuff is real? As an aside, I doubt the real life R.O. ever slept on the assembly line. Or maybe he just never got caught. We’ll probably never know.

In a fit of brillaince I realize I had posted the wrong strip with this commentary. That has now been corrected.