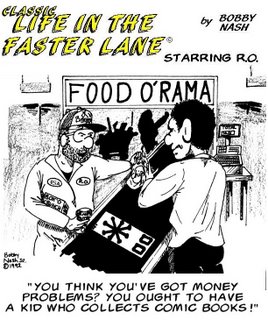 Recycling is not only good for the environment, but it’s a proven, useful tool in the life of this cartoonist.

In 1992 I was pumping out R.O. strips quickly. As I mentioned previously, once I sink my teeth into an idea it’s hard for me to let it go. As an avid comic collector, this one was more the writer/artist’s point of view than the character’s, but it made for a cute strip.

Cut to 2005 and the deadline for Keeping Up With Kids had come around again, as it did every month. What to do? What to do? I was drawing a blank, which happens more often than I care to admit but usually only when I wait until the last minute to do the strip.

Which also happens more often than I care to admit.

The latter is what happened here.

I had drawn R.O. standing in line at the bank. After several failed jokes, I dropped in an oldie from the beginning of the run. "You think you have money problems? Try having a kid who collects comic books." It worked perfectly and there’s no reason R.O. couldn’t make the same comment twice. Anyone who collects comics can, I’m sure, relate to this strip.

And thus, Recyclo-Bob, as my friend Jeff has been wont to call me, saves the day again.

Eventually, we’ll see more instances where I recycled art with a new gag. Which usually has something to do with deadlines and waiting until the last minute. 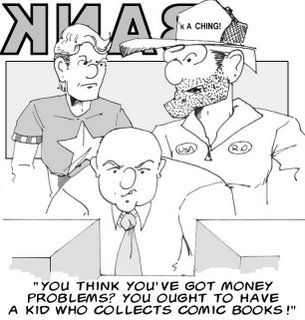 Ha, Bobby, I am in awe of your ability to get so much mileage out of the same gag.
They should put you in charge of the
country's energy supplies. Ha.
Ron

HA Thanks, Ron. You should see how many different times I used the image of R.O. pushing the truck with Mel in the back making a comment. I got a lot of mileage out of that one, if you'll pardont he pun. :)