CRUISIN’ LIFE’S FASTER LANE: PART 2: WHO ARE THESE PEOPLE? 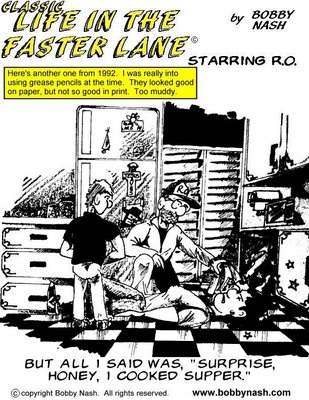 CRUISIN’ LIFE’S FASTER LANE
PART 2: WHO ARE THESE PEOPLE?

Now that I had the character of R.O. Nudell firmly in place, I doodled out several strips with R.O. just being R.O. Some where funny, others not so much. I’ll leave those types of discussions to you, the reader. As I mentioned before, I was really into the character and I worked up all manner of one-panel gags. Eventually, I knew that we would need to meet R.O.’s family.

That lead to this strip, also from 1992. An aside here, for those who strive for accuracy. Aside from the first strip, I honestly do not remember in what order the strips were drawn. There were some days where I did multiple strips one right after the other. For me, R.O. & co. fall into two eras. The original look and the looks the characters sport today. As you can see on the introduction page, the characters are a bit more angular and less frumpy.

There is also the grease-pencil and non-grease-pencil eras. As you can see in this strip, as well as last week’s, I used a China Marker (or grease-pencil) for backgrounds. On the originals it looked great. In print, not so much. A valuable lesson I picked up in those early days.

The strip featured above serves as a nice introduction to Honey and Melvin Nudell. Being the dutiful creator, I approached my mother and brother in the same manner I had R.O. My brother didn’t seem to really care one way or the other, which made his inclusion easy. More about him in a minute. On the other hand, Mom was less than thrilled to become a comic strip character. That posed a bit of a problem.

I was left with three options when it came to including R.O.’s wife, who was not my mother. One, I could make R.O. a single parent. Two, I could have him married, but never see his wife on panel (which some television shows have managed to pull of pretty well). Or three, I’d just invent a wife close enough to Mom, yet different enough so as not to upset her. Again, I was living at home at the time and keeping the people who put a roof over my head in a good mood was high on my priority list.

A new Mom firmly created, the hard part was giving her a name. In one of those fits of perceived brilliance you get when desperation sits in, I got it. I’ll keep her name a secret. When R.O. talks to her he calls her Honey.

Having called her Honey so many times, the name stuck. It was as good a name as any, I suppose. Eventually, Mom came around. One day she says to me, "That doesn’t look anything like me." At that point I slowly began molding Honey into what we see today, a nice amalgam of made up Mom and flesh and blood Mom.

I kept the name though. By then it had stuck.

As for the character of Melvin Nudell, that one was easy. It’s my brother Wesley’s middle name.

I thought it was perfect.

We’re still on speaking terms so it obviously didn’t bother him too much. Plus, the Mel (I eventually shortened it) you see in LITFL is no longer the same as him. For one, the comic characters don’t age. He’s still a twelve year old in the strips. I may have to age him one of these days so I can throw in some driving humor.

At one point I had considered giving R.O. and Honey a fictional daughter, but quickly abandoned the idea because she really did not add much to the strip. As for the comic strip version of me, he shows up once or twice before I realized that he too added nothing to the strip. Basically, I fired myself. Although, I will admit I drew myself much thinner than reality.

Okay, so now we’ve met the cast. Next time we’ll look at more of the early strips so we can wonder, what was he thinking? together.

"Basically I fired myself." Sheesh, Bobby, I thought I was a tough boss!
Ha.
Ron

Like Remington Steele, I decided that I serve best in an advisory position. HA!