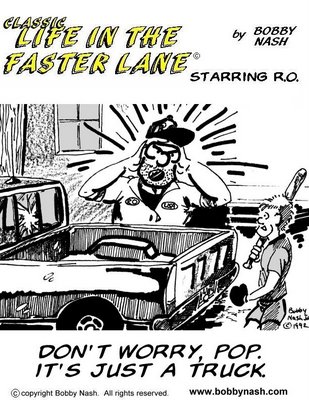 This strip is loosely based on a real life event, the punch line of which remains one of my family’s favorite in-jokes to this day.

I had just purchased my first brand new vehicle, straight off the lot, a charcoal gray Chevy S-10 truck. I drove it home, proud as the proverbial peacock. That was the extent of driving I had done in my new vehicle. From the dealership to home.

So the family comes out to give it the once over, including my grandmother who was visiting us that week. My brother was riding his bicycle when he decided to see what all the fuss was about. In his enthusiasm, he lost his balance and gouged a very large, very deep gash in the driver’s side door of my brand new truck. My. Brand. New. Truck.

My blood boiled, steam rising off the top of my head. My eyes might have turned red and shot fire. Reports vary.

My brother, wisely, ran for the hills.

It’s just a figure of speech. We had no hills.

My Dad stepped in, as Dad’s are wont to do in situations such as these. Strategically placing himself between the target of my wrath and myself, he calmly said four little words that would stick with me for years, and which inspired this week’s strip.

While the old man’s words of wisdom did nothing to improve my foul mood at the time, I can now, almost fifteen years later, look back on it and see that R.O. was indeed correct. The truck was just an object. Once the anger cooled, we all looked back on it and laughed.

I didn’t laugh as much (read: at all) roughly two and a half years later when the truck was stolen, but that’s another story for another time.

Although it would be only a few years later before I got the satisfaction of reminding my Father of his "just a truck" comment, when a similar incident befell his truck, which is also a tale for another time.

My family and I have gotten more mileage out of the "it’s just a…" saying than I ever got out of that little gray S-10. We still laugh about it today. Even when I purchased a new vehicle a few weeks back, the first words out of my brother’s mouth were, you guessed it, "it’s just a…"

And I got one of our favorite Life In The Faster Lane strips out of the deal.

Like most episodes of Life In The Faster Lane, this strip echoed real life. It seems as though most of the better strips in the run are those based on true events, such as this one, though sometimes exaggerated or slightly altered as it was here when I changed the implement of destruction from a bicycle to a baseball. I also changed the damaged area from the door to the back window. Sometimes accurate portrayals had to give way to serving the punch line.

Well, they say timing is everything.

Just a week and a half after originally running the "It’s just a truck" comic and commentary on-line, something happened. With the permission of the real R.O., my Dad [who you can see for the first time in real life in one of the photos], I share this.

A very large, rather ugly buzzard and my Dad’s truck had an ill-fated meeting this week. Thankfully, R.O. wasn’t hurt, which was my first question. Is he okay?"" When I found out he was unharmed, the next words out of my mouth to my Mom were, "remind him it’s just a truck."

It amazes me how several people whom I showed the photos had the same response I did.
R.O.’s reply to all this, you ask? Eat more chicken. R.O.’s not a fan of poultry. 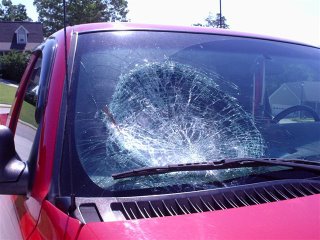 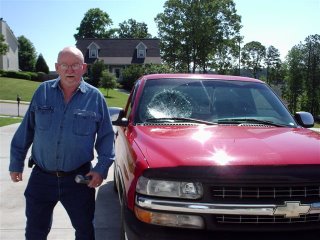 Posted by BobbyNash at 7:15 PM